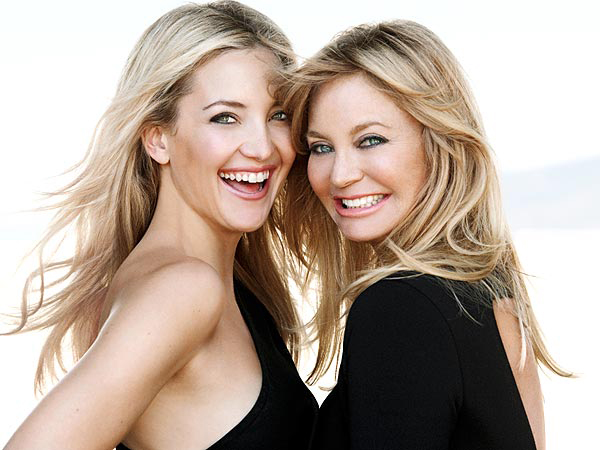 “Growing up with my mom [Goldie Hawn] there was always a sense of fun and it comes down to optimism as well. When you learn how to be optimistic and wake up in the morning and appreciate things and create that in your brain, I think you start to have an enjoyment of life and it shows.”

At 33, Kate Hudson is one of the most recognized and beloved actresses in Hollywood. The daughter of America’s sweetheart, actress Goldie Hawn, reached global fame after earning an Oscar nomination in 2001. She gave an unforgettable performance as a traveling groupie in Cameron Crowe’s modern classic Almost Famous.

Following in the footsteps of her mother who won an Oscar for Best Supporting Actress in 1969’s Cactus Flower, Hudson took home a Golden Globe Award for the role. Hudson has since starred in lighthearted comedies, such as 2003’s How to Lose a Guy in 10 Days, You, Me and Dupree in 2006, 2008’s Fools Gold, and Bride Wars in 2009. Last year, Hudson made her first primetime television appearance as Cassandra July on the musical comedy-drama “Glee.”

Hudson and her brother Oliver grew up with their biological mother Goldie Hawn and mom’s partner since 1983, Kurt Russell. The young actress claims that biological father, Bill Hudson, doesn’t know his daughter. And she says that’s fine with her, as Russell has done a spectacular playing dad’s role in her life.

Hudson told MTV News that Hawn is her role-model, describing her as “the woman that I’ve learned the most from, and who I look up to, who has conducted her life in a way that I can look up to.”

“Growing up with my mom there was always a sense of fun and it comes down to optimism as well,” Hudson told The Associated Press earlier this year. “When you learn how to be optimistic and wake up in the morning and appreciate things and create that in your brain, I think you start to have an enjoyment of life and it shows.”

Are You Good at Appreciations? Find Out Here.

Hudson went on to explain that she sees herself as a more empathetic, as well as close to her parents since becoming a mother. Raising a child of her own has made her more self-confident as a woman.

“The relationship between mother and daughter is very complex and to be able to talk about the importance of the relationship is something that I look forward to,” she said. “It really informed such a huge part of who I am and the confidence that I have as a woman. It really does come from the closeness that I have with mommy.”

While Kate Hudson and Goldie Hawn have never worked together in a movie, they teamed up, discussing their relationship, for a memorable for this year’s Mother’s Day.

Hudson is well-known for her attraction for rock stars. In 2000, she married the Black Crowes frontman, Chris Robinson. The pair has a son, Ryder Russell Robinson. The couple cited “irreconcilable differences” when they divorced in 2007.

Since 2010, she and the lead singer of Muse, Matt Bellamy, have been an item. They were engaged in April of 2011, three months before Hudson gave birth to their son, Bingham Hawn Bellamy. Although together just three years versus mom’s 30 year partnership with Kurt Russell,  they haven’t tied the knot. Hudson told Ellen DeGeneres that Ryder has been pressuring her to get married. “I think he looks forward to more the party than actually the idea of us getting married,” she confided.

“I always remember my mom saying that there’s only one thing in life she refused to fail at: raising her children,” Hudson told Glamour. “It just shows you it’s very possible to do the thing that makes you happy and still raise a wonderful family.”

Despite Hudson and Bellamy’s busy schedules, they always make time for their families. The whole clan, including Hawn, Russell, Oliver and all of the kids get together once a year for a family vacation. “There’s nobody I would rather be with and spend time with,” Hudson explained to People. “My parents know how to party — they’re a blast!”