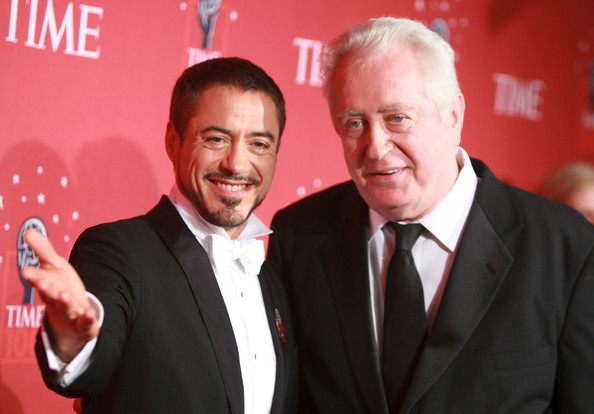 “He was a great innovator and a heck of a filmmaker. I mean, I grew up with people saying, ‘Hey, that’s Bob Downey’s kid’ — and understandably so.”

The seeds for Robert Downey Jr.’s Oscar nominated role in 2008’s Tropic Thunder and his successful career in movies were planted and inspired by has father from the Hollywood superstar’s earliest years.  “He was a great innovator and a heck of a filmmaker,” Robert Downey Jr. said about his father to MTV News.  “I mean, I grew up with people saying, ‘Hey, that’s Bob Downey’s kid’ — and understandably so.”

With 79 credits to his name, Robert Downey Jr., Hollywood’s most valuable movie star, has been looking up to Robert Downey Sr.’s work ethic since he was four. That’s when he first worked alongside his father in 1969’s advertising spoof Putney Swope.  The following year, Robert Downey Sr. began directing his 5-year-old son in feature films, such as the comedy Pound. Robert Downey Jr. moved to California with his mother after his parents were divorced in 1978.  However, he dropped out of Santa Monica High School in 1982 and moved back to the Big Apple to be near his Dad.  It certainly didn’t hurt his career in show business.

Robert Downey Jr. was a quick success, with featured roles in a number of romantic comedies throughout the eighties, including Baby It’s You, Girls Just Want to Have Fun, and The Pickup Artist.  By the nineties, Robert Downey Jr. was featured in more critically acclaimed films, such as Chaplin, for which he was nominated for the Best Actor Oscar.  Both father and son star in 1997’s cult comedy Hugo Pool, alongside Alyssa Milano, Richard Lewis and Sean Penn.

More recently, Robert Downey Jr. was cast again as Tony Stark in Iron Man, along with its two sequels. In Iron Man 2, the character struggles with the memory of his Dad. The superhero’s father was a world-renowned weapons manufacturer who passed away.  The son was left with cosmic wealth and power.  “In Tony’s case, it’s really this massive looming shadow of his dad’s posthumous perfection,” Downey explained.  “That’s a tough thing for him to live up to.”

Robert Downey Jr. certainly had big shoes to fill, considering that Dad has been in the business for decades.  Born Robert Elias, Robert Downey Sr. grew up in Greenwich Village.  The oldest Downey certainly has a well-rounded resume.  He served in the Army and became a playwright.  Robert Sr. was also a Golden Glove boxing champion, as well as a semi-pro baseball player. He even struck out Yogi Berra in a game.  Robert Sr. eventually became an accomplished writer, director and producer.  By 1961, he was writing and directing films, such as Ball’s Bluff and Greaser’s Palace, released the following year.  Making movies was a family event.  The man’s first wife Elsie appeared in several roles and even co-wrote 1965’s Moment to Moment. He even shared the screen with Robert Jr. in two flicks, Johnny Be Good in 1988 and 1994’s Hail Caesar.  Dad also appears in 1997’s Boogie Nights and 1999’s Magnolia.  Now 73 years old, Robert Sr. has stepped out of the spotlight.  He lives quietly with his current wife, Rosemary Rogers.

It has also been a sensational year for Robert Downey Jr.’s 20-year-old son, Indio. His band The Seems recently signed a deal with Warner Bros. Records. Meanwhile, Indio is no longer an only child.  Robert Downey Jr. and his current wife, Susan Downey, are now parents to a one-year-old son, Exton.  Click here to watch Dad and Mom discuss the joys of fatherhood and motherhood on Ellen.