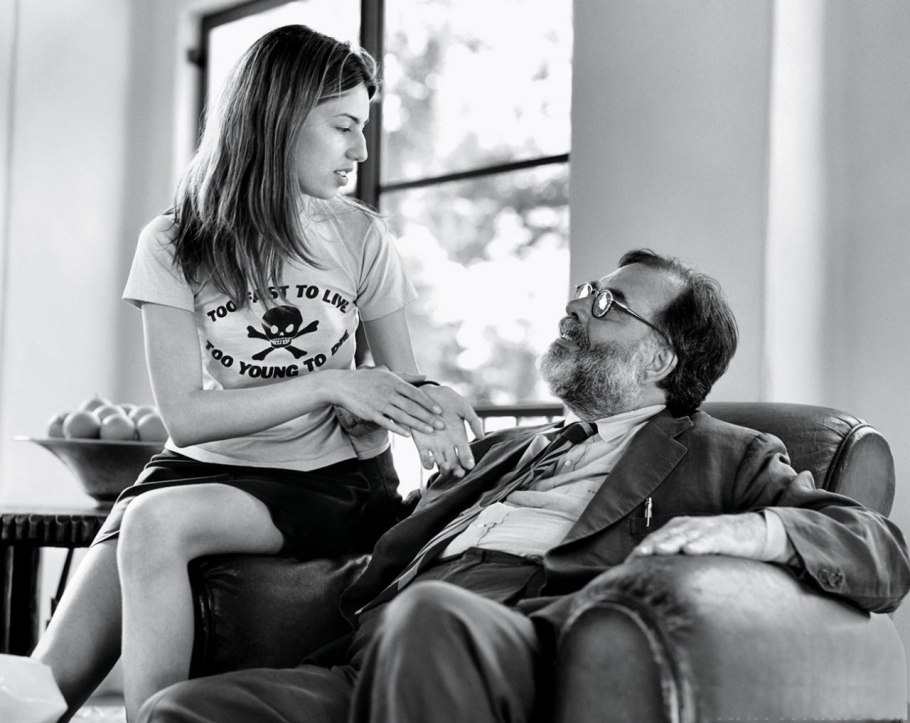 Daughter to The Godfather’s Francis Ford Coppola, director Sofia Coppola examines the role of a father and his little girl in 2010’s Somewhere.

Sofia Coppola knows what it is like to grow up with a famous Dad.  In fact, the famous father and daughter relationship is explored in her 2010 film Somewhere.  Written and directed by the young Coppola, the dramatic story revolves around the father and daughter relationship with an emphasis in show business.  The subject is anything but foreign to Sofia, daughter of The Godfather’s legendary Francis Ford Coppola.

Stephen Dorff portrays Johnny Marco, an actor who recently made it big in Hollywood.  Despite his recent success, his wife leaves him.  Johnny feels isolated with little meaning in his life.  That is until Mom suffers a breakdown and leaves Dad to take care of their 11-year-old daughter Cleo.  Caring for his little girl, Johnny is forced into fatherhood.  Played by the young Elle Fanning, Cleo and her Dad spend plenty of time together at his hotel, the legendary Chateau Marmont in Hollywood.  They hang out in his lush suite, play in the luxurious pool and bond on a publicity excursion to Italy before Cleo departs for summer camp.  During their short time together, feelings of fatherhood appear for the first time in Dad’s life.  Reassessing his priorities, Dorff’s character matures as a father.

Sofia Coppola claims the parenthood theme was poignant after the birth of her child.  “The movie’s the first thing I wrote since having a kid,” she told MTV News.  “I definitely think that changes your point of view or that it had an effect on what I was thinking about.  So the character had a kid, and how it affected him was definitely part of the story.” Click here to watch the movie trailer on YouTube. While Somewhere is not autobiographical, the concept is familiar to Sofia.

Personal memories were used throughout the screenplay, such as being seen in public with a celebrity and living in different hotels while Dad was making movies.  As a child, Sofia thought it was tons of fun to see the world and order room service.

When writing Somewhere, “the idea of parenthood was on my mind because I was experiencing it,” Sofia explained to the Gulf News.  “I was thinking about how it changes your perspective and how it would affect this kind of character.  It made me think of my own childhood and I tried to put in memories of that.”

After being panned by critics for her portrayal of Mary Corleone in the third installment of The Godfather, Sofia has found her place behind the camera as a director, as well as a writer and producer.  In 2004, she took home an Oscar for Best Original Screenplay Lost in Translation, starring Bill Murray.  Making her Old Man proud, the film also earned her a nomination for Best Director.  After all, Sofia Coppola employs stunning visuals throughout her entire catalogue of work.  In fact, Somewhere won the Golden Lion award for Best Picture at the 69th Venice International Film Festival, making Sofia the first American woman to win the festival’s top prize.

Sofia was once married to Three Kings director Spike Jones.  The two were divorced in 2006.  These days, Sofia is married to Thomas Mars, the French singer for the band Phoenix. The couple have two daughters, 7-year-old Roxy and 4-year-old Cosima.

People once asked Sofia if she has learned all the ins and outs of parenthood.  “No, I don’t think anyone has it down pat!” she said. “It’s definitely a new adventure.”  The director also referred to Motherhood as an “adventure.” In a New York Times article on meeting the expectations of motherhood and fatherhood,

Jere Longman of the University of Oklahoma claims that daughters and sisters of extremely famous personalities are lending women larger fame.