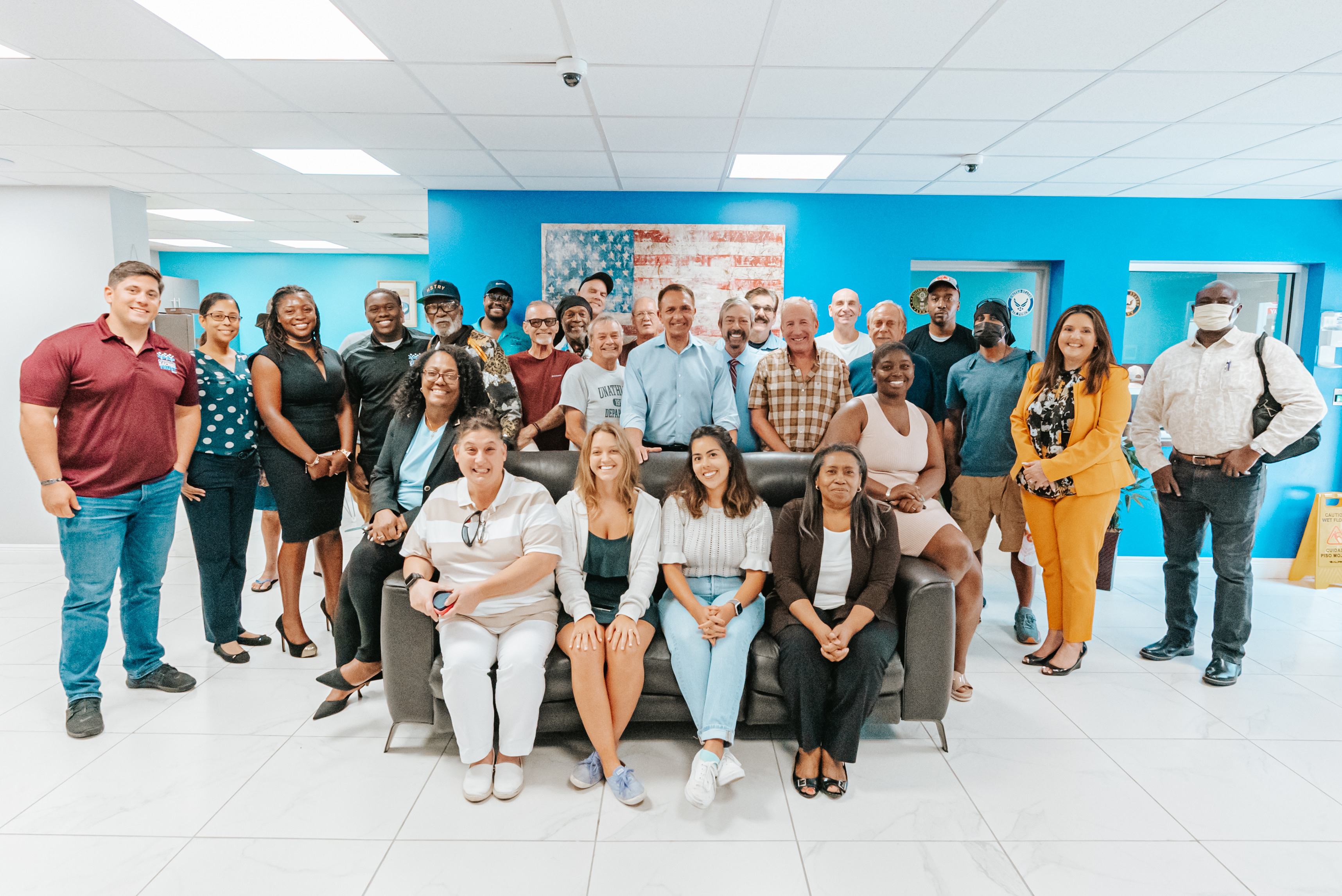 “When you fall into a state of homelessness … you are enslaved,” Mayor Trantalis said as he recalled meeting doctors, professionals and “everyday folk” who had fallen into homelessness as a result of a health crisis, relationship crisis, or many other factors that also face millions of other Americans, but with no one to fall back on.

“What we do as a community, as leaders,” the mayor emphasized, “is try to help those who need assistance. It’s not a handout, but a hand up.”

Mayor Trantalis met with homeless and formerly homeless Veterans at Purpose Built Families Foundation’s (PBFF) Supportive Services for Veteran Families (SSVF) headquarters in the heart of Broward County. He emphasized the commitment of the City’s entire elected Commission, the hiring of homeless assistance staff to coordinate services, and the creation of a community court that provides specialized assistance to help homeless residents overcome legal challenges.

PBFF is the largest service provider for homeless and at-risk Veterans in both Broward and Miami-Dade counties. Since 2011, the foundation’s Operation Sacred Trust collaboration has been grant funded by the U.S. Department of Veterans Affairs Supportive Services for Veteran Families program. In 2021, Operation Sacred Trust also took over responsibility for operating a 45-bed VA-funded Grant Per Diem (GPD) transitional housing program for homeless Veterans in Broward County. In March, VA awarded the nonprofit foundation a $3.3 million GPD Capital Grant to strengthen the transitional housing program.

“Your operation is a Godsend …”

$6.1 Million is Pandemic Assistance for Veterans

During COVID-19, Purpose Built Families Foundation provided more than $6.1 million in financial assistance to help local Veteran families, including more than $2 million for rental assistance to area property owners and nearly as much to keep at-risk Veterans in safe, stable temporary housing throughout the pandemic.

“As a compassionate country, we will not stand idly by while veterans call the streets their home,” former HUD Secretary Ben Carson said in August 2018, when he met with Eisenberg and other local Veteran advocates to congratulate them on their success in Miami-Dade County.

Juan Flores was a Broward County high school student when terrorists attacked the World Trade Center on 9/11. He went on to enlist in the Marine Corps and served multiple combat missions in Iraq. For the past five years, Flores, who gave up his career as a chiropractic physician to work for Operation Sacred Trust, leads a team of Veterans who make sure every call for help is answered.

Flores shared his personal commitment in the meeting with Mayor Trantalis. “All I want to do is help my fellow Veterans,” Dr. Flores said. “From the moment I reached Operation Sacred Trust, I’ve never looked back,” he said.

“We need our veterans to flourish.”

During his 2018 visit, Dr. Carson said: “We need our veterans to flourish. We need their contributions, their skills, and their love of country. They’re vital to our national character, to our spirit, to the very soul of democracy itself. Their sacrifices remain the foundation of our liberties-the rock upon which our economy rests.”

Several of the Veterans who participated in Wednesday’s meeting with Mayor Trantalis said they showed up to thank Fort Lauderdale’s highest elected official personally for supporting the Operation Sacred Trust program.

One Veteran told the story of his recent eviction and a police officer who told him to call Operation Sacred Trust. “Within a month, I was in my own apartment again,” the Veteran said.

Others spoke of the agency’s compassionate approach.

The difference an Outback Bloomin’ Onion can make

“These people really care,” a formerly homeless Air Force Veteran told the mayor. The Veteran recalled confiding to Eisenberg six years ago during a period of homelessness how much he craved a Bloomin’ Onion. “An hour later, Seth [Eisenberg] showed up with bags of food from the local Outback Steakhouse. I’ll never forget his kindness. These people really do care, and it shows.”

“A face and hand that wants to help …”

“Everyone who falls into homelessness needs to know there’s a face and a hand that wants to help them,” the mayor responded.

Eisenberg said the far majority of Veterans who reach out for assistance from the agency’s Operation Sacred Trust team learn about the program online.

“More Veterans are pursuing the benefits and assistance they’ve earned,” Eisenberg said. “Every day, Veterans reach out via social media and our websites for help having the same opportunities for life, liberty and the pursuit of happiness they served and sacrificed to give all Americans.”

Janely Ramos, Operation Sacred Trust’s Director of Permanent Housing, said the agency’s most critical need is for affordable rental apartments, homes and rooms in Broward and Miami-Dade counties. The agency works directly with local landlords, can provide up to 24 months of rental assistance to help homeless Veterans get back on their feet, pursue earned income and benefits, and “is there to stand behind Veterans if they face tough times again.”

While Mayor Trantalis said Fort Lauderdale is investing in more affordable housing, those present agreed the housing shortage in South Florida is a crisis that’s made it more difficult and expensive to help homeless Veterans.

“Anyone who has an affordable apartment or room to rent, we urge you to call,” Eisenberg said, calling out the agency’s 855-778-3411 phone number. Last year, the foundation invested in a public advertising campaign that led many local property owners to provide rentals for Veterans served by Operation Sacred Trust, but Ramos said hundreds of local Veterans are still in need of affordable housing.

Veterans who are homeless or facing the imminent risk of homelessness in Broward or Miami-Dade counties can reach Operation Sacred Trust at 855-778-3411, email intake@411veterans.com, or apply online at operationsacredtrust.com. Veterans seeking help anyplace else in the country can locate a VA-funded Supportive Services for Veteran Families program in their community at veteranhousinghelp.com.