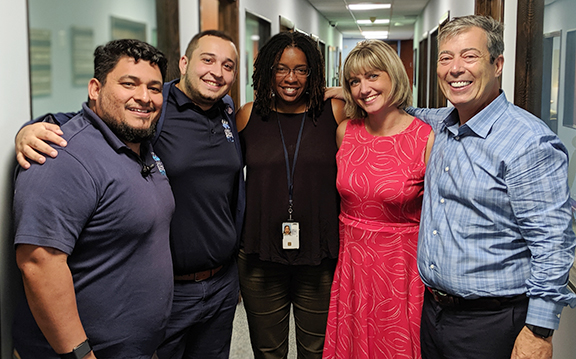 Fewer than 10 percent of America’s adult population have served in the military. On Veterans Day, we honor the nearly 20 million Americans who have served.

Each of these heroes among us has a name.

One name is Dr. Juan Flores.

In a recent conversation at the Operation Sacred Trust Supportive Services for Veteran Families program in Pembroke Pines, Florida, Dr. Flores recalled the precise moment he decided to enlist in the military.

“The teacher rolled out a TV, plugged it in, and turned on the news,” the former South Broward High School student remembered.

It was two minutes after nine.

“As soon as it turned on, maybe five seconds later, we watched the second plane hit,” Flores recalled.

“Watching that second airplane hit the tower, I wanted to go defend my country,” he said.

Flores is one of more than four million who volunteered his life to fight for America after the 9/11 terrorist attacks. This generation of warriors is “more likely to have been deployed, seen combat, and experienced emotional trauma,” according to a recent Pew Research study.

He had immigrated to South Florida from Peru and was not yet an American citizen, yet Flores knew that September morning that it was his nation that was attacked, his duty to respond.

After his Marine Corps service, including multiple deployments, Flores earned his Bachelors and then went on to become a Chiropractic doctor.

Despite eight years successfully pursuing a medical career, Flores realized his passion was serving those who had borne the battle.

He knows too many who served and have not survived. For Flores, the call of duty continues.

More than 100,000 post-9/11 Veterans have died since their military service. Fewer than one in ten died as a result of combat or during active-duty service.

For Dr. Juan Flores, the tragedy of 9/11 became a call that continues daily as he searches South Florida’s streets, alleyways, hospitals, and shelters; answers calls, texts, and emails; whatever it takes to be there for fellow Marines and other service members who have fallen on hard times.

On Veterans Day, we honor these heroes who live among us.