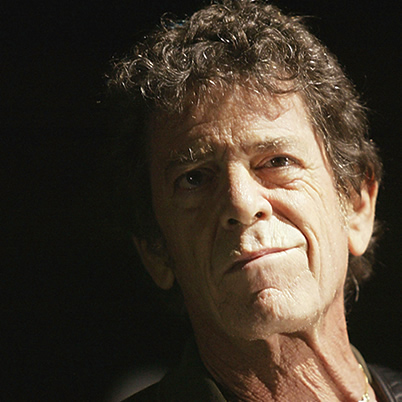 “His songs sound like blissful death, other times nothing so elegant. They rub the private music that rises and falls with the beat of the ecstatic, broken heart. It’s the walk home from the bar, yes, but punctuated with miserable retching in an alley; it’s the jump in the shimmering lake only to find that quietly fluttering to the bottom is a strangely real option; and the bike in the sun? Well, the sun is black as hash.”

If it wasn’t for Lou Reed, there’s a good chance the world would have never come to know David Bowie, Lenny Kravitz, Ryan Adams, Courtney Love and many others whose out-of-the-box musical artistry and lyrics engaged, enraged and inspired generations of performers, fans, and critics. Reed is considered by many to be the Godfather of Punk.

Brooklyn-born Lewis Allan Reed likely came into the world ahead of his time. He passed away today at the age of 71, leaving behind a rich and diverse legacy as unique as the man himself.

Lou Reed became well-known after co-founding an experimental rock band, The Velvet Underground, with Welsh musician, composer and singer-songwriter John Cale. Together, they released 11 albums from 1967’s The Velvet Underground & Nico to 2001’s Bootleg Series Volume 1: The Quine Tapes.  The musician is best known for 1972’s “Walk on the Wild Side,” a number about experiencing the darker sides of life.  Reed’s adverse discography of punk rock includes more than two dozen solo releases, including his last, 2011’s Lulu, performed with the heavy metal icons Metallica.

In a 2000 profile, Salon.com’s Chris Colin wrote, “Reed’s raw brand of poetry has been permanently yoked, in rock history consciousness, with such characterizations as honest, direct, open and, most troubling, authentic. Grit, these characterizations insist, is somehow more ‘real’ than prettiness.”

If there was one thing Lou Reed was committed to, it was being different from the father who raised him. A professional accountant in whose office Lou Reed worked for a time before the release of his first album, the musical poet definitely succeeded in living a life very different from his father’s.

“I didn’t want to grow up like my old man,” Reed said.

Whether those feelings came from experiences we will never know or his parents’ decision to send their 17-year-old son for electric shock therapy to deal with fears he was homosexual, Reed sang out his pain more than a decade later in “Kill Your Sons.”

Lou Reed died less than 100 miles from the Brooklyn community where he was born, in the modest town of Southampton, NY where he, his wife of five years, Laurie Anderson, and their dog, lived among 14,000 families whose median household annual income is less than $60,000.

As David Hinkley wrote in the New York Daily News, “Reed was one of the few artists who meant it when he said he was unconcerned with the commercial appeal of his music.”

Yet, every time the musician looked in the mirror, he caught a glimpse of his abusive father.  It had been more than 50 years, and Reed never outgrew the pain.  Not even until the day he died.

Friends, family and fans can only hope Lou Reed finds the peace in death that so long seemed to escape him in life.