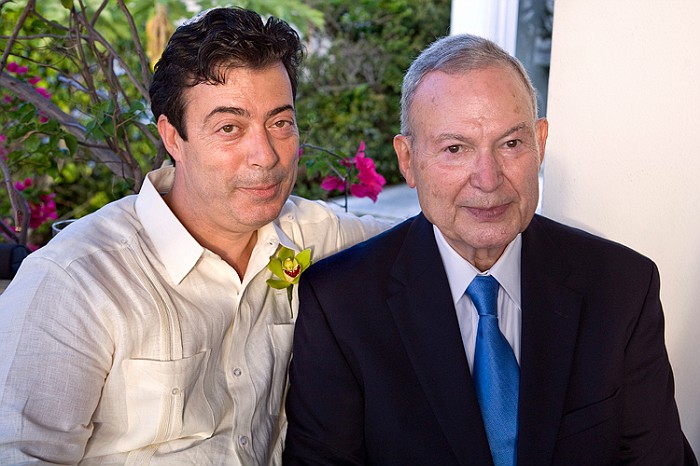 “I’ve never been at a loss for nicknames. There’s D-Wade and Flash. I love them both, but to be honest, no label sounds as good to me as Daddy.”

My father, Milton Eisenberg, died on December 22, 2011. I vividly remember the call from my brother, knowing as I picked up the phone that he had sad news to share and fairly certain of the words he was about to speak.

Dad and I never got to know each other. After 17 years of marriage, he and my mother divorced in 1964. I was three, the youngest by seven years of their four children together.

For the far majority of my life, my father was defined by my connection with my mother. Endless, deeply personal stories of hurt and betrayal shared over and again from my earliest years. Anything that went wrong in our lives – every disappointment, mistake, financial challenge, feelings of sadness, loneliness or isolation – seemed to somehow come back to being dad’s fault.

It was long into adulthood that I came to understand that the image I’d accepted of my father was almost entirely shaped by my mother’s sadness, anger, and contempt — and that it didn’t have to define our father-son relationship.

But by then, it was too late, despite what I now realize were my father’s attempts to reach out. Too many years had passed. Too many painful experiences, emotions and thoughts had been seared into my spirit, heart and mind that I never found the courage or humility to create a relationship with him as I wish I had. Until the moment of his death, we remained little more than strangers to each other.

In a typical year, a million children are impacted by the divorce of their parents. The far majority will grow up with their mothers. From my work with thousands of youngsters and their parents, I know my experiences are not unique. Too rarely does the parent who gets custody – or, for that matter, the non-custodial parent — have the perspective, knowledge and compassion to avoid transferring their personal experiences with a former spouse on to their children. That’s not just the situation for parents who divorce. It can be equally true of couples who stay together for years or decades in a constant state of marital crisis, estrangement or despair.

Any perceived benefits of negatively portraying a parent to a child are far outweighed by the lasting consequences on the child. That impact can and often does affect a person’s identify, self-worth and feelings about love, intimacy, and trust long into adulthood and frequently, for their entire lives.

The decision for two adults to divorce — or even to remain married in an unending state of conflict — will typically touch their lives and family for generations to come. There are repercussions that often have lasting economic and emotional consequences, some of which can be overcome or mitigated in the years following the end of a marriage. And others that are never overcome.

But the consequence of parents transferring their pain, sadness, bitterness and disappointment on to their children may never be overcome. Those consequences can be, and often are, passed down from generation to generation.

Although it’s more than two years since I’ve faced the struggle of how to acknowledge a man I barely knew on Father’s Day, I suspect I’ve made peace with that aspect of my life. For me, the experience positively guided the choices I made that led to close, loving relationships with my three sons, including two from a marriage that ended in divorce. I also know it’s inspired my work to help other parents and children navigate difficult moments in their lives.

I suspect my dad understood more than I did about our relationship. While I wish I could reach out to my father on this Father’s Day to wish him happiness and love, I trust he knows what’s in my heart.

To everyone who has known the joy and meaning of being called Daddy, Happy Father’s Day!

Seth Eisenberg is President/CEO of the nonprofit PAIRS Foundation, an industry leader in relationship and marriage education.

2 thoughts on “Father’s Day, Parents and Children of Divorce”