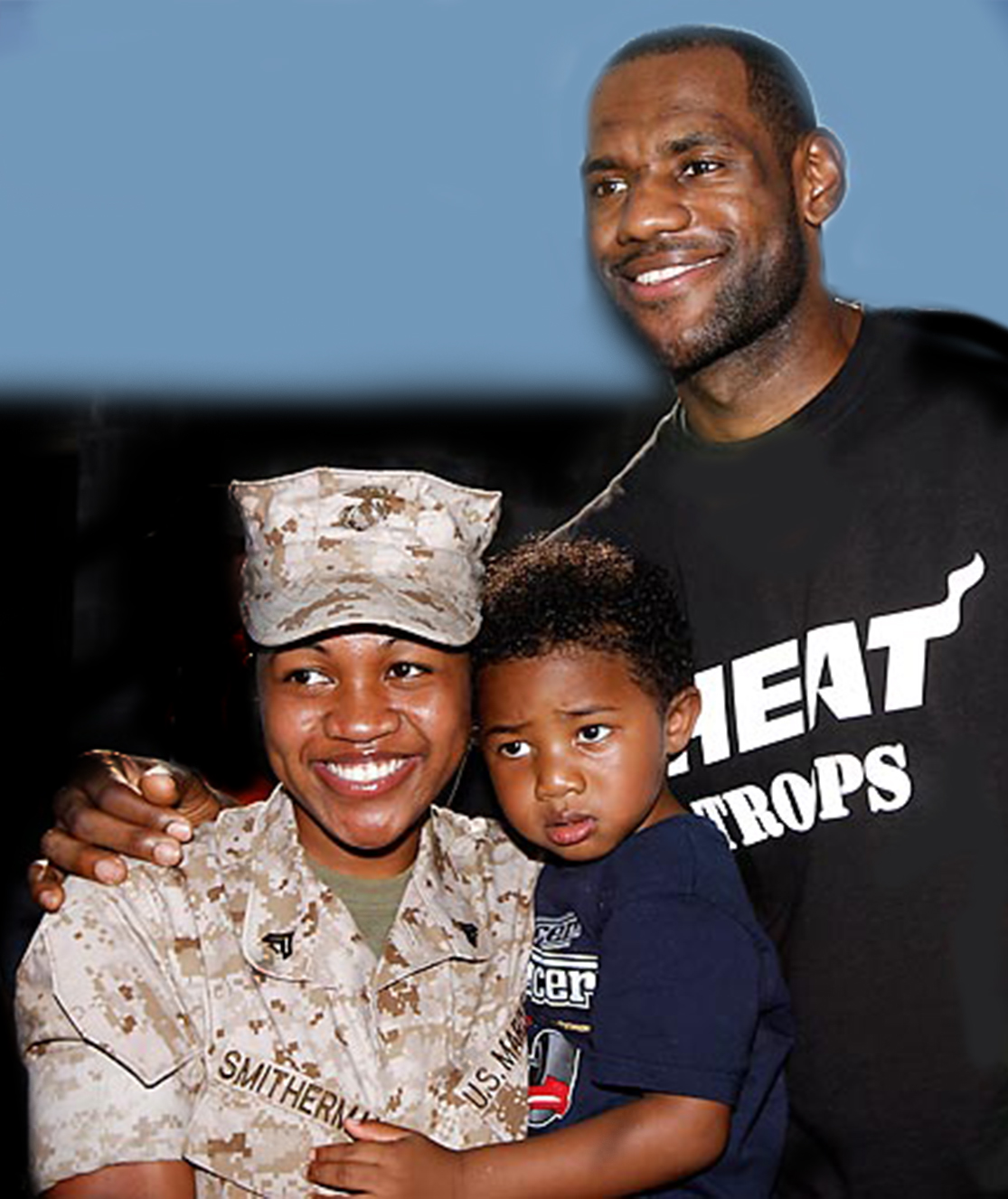 With more than 15 percent of the nation’s veterans and tens of thousands of active-duty military living in Florida and Texas, you can be sure a lot of soldiers are cheering for either the Spurs or Heat in the NBA Finals that begin tonight at 9PM Eastern at Miami’s American Airlines Arena (ABC-TV).

While the Lone Star State is home to many more current servicemen and women, the numbers are almost even when it comes to military veterans. Combined, 3.2 million veterans live in Texas and Florida.

The Miami Heat have gone out of their way to reach out to the veteran and military community in Florida and elsewhere, including during a road trip late last year when MVP LeBron James insisted his teammates join him to pose for pictures with soldiers passing through the same Oklahoma airport.

In a 2010 meeting with PAIRS Foundation CEO Seth Eisenberg, Bosh and Riley stressed their shared commitment to helping veterans succeed.

“Miami Heat support for our local veteran community has made a world of difference,” Eisenberg said.

After his meeting with Bosh and Riley, Eisenberg helped write a proposal to launch Operation Sacred Trust, a VA-funded initiative that has since helped more than 2,800 veterans and family members in south Florida’s Miami-Dade and Broward counties who are struggling to overcome homelessness.

Eisenberg said the personal experience of the Heat players and the franchise’s commitment to giving back has helped focus attention and resources needed to assist thousands of men and women reintegrating into their homes, jobs and communities after deployments to Afghanistan and Iraq.

In a story for ESPN, Allison Glock wrote about Chamber’s father:

“With door-wide shoulders and a voice disc-jockey deep, Ronnie presents an imposing figure — the product of 22 years in the Air Force and an innate dignity that makes everyone in the room seem mealy and punk-ass the moment he enters. Ronnie has managed his son’s career, from birth to present, with determined intensity. Formal lessons began in the backyard, where he taught Mario ‘how to dribble, when to shoot.’ He then coached an Anchorage YMCA league team, which Mario led to a state title as a seventh-grader. Ronnie later started an AAU team so his son could face stiffer competition and explore broader opportunities than Alaska provided. At Bartlett High, the father (again as head coach) and son teamed to win state championships in 2002 and 2003 but lost out on a third in 2004 at the buzzer in overtime.”

Ray Allen’s father was a Master Sergeant in the Air Force.

Talking about the sacrifices military families make during deployment, Allen said: “We’re home … able to be in close proximity to our families. These guys probably haven’t seen their families, some years, months, whatever it may be … it always gives me proper perspective. We get to play this game that we love; we get to play it every single day. There are so many people who are fighting for our freedom who are away from their family, and that’s the sacrifice that they make.”

After visiting the President in the White House to celebrate their 2012 NBA Championship, the Heat players went to the Walter Reed National Military Medical Center to cheer up wounded soldiers.

During the holidays, Heat Forward Shane Battier recorded a YouTube video to thank America’s military men and women for their service.