by PAIRS Foundation
What is PAIRS? Intimacy is critical to the process of developing and sustaining close relationships, now a major concern in our culture. Modernization has shifted the primary function of marriage from providing security, stability, and raising children to developing a lifetime of love and intimacy. In previous generations successful marriages depended upon duty and role competence. Modern marriages require greater interpersonal competence as well as equality between partners. Relationships are sought that not only create stable families but also provide partners with a lifetime of love and companionship. The PAIRS (Practical Application of Intimate Relationship Skills) programs, developed by Lori H. Gordon, Ph.D., provide a comprehensive system to enhance self-knowledge and to develop the ability to sustain pleasurable intimate relationships. Gordon's approach integrates a wide range of theories and methods from psychology, education and psychotherapy and presents them in an educational format. PAIRS acts to bridge therapy, marital enrichment, and marriage and family development. Programs: Courses and Workshops PAIRS offers programs to the public led by PAIRS Trained Professionals (licensed health care professionals), and PAIRS Instructors (certified clergy and educators), trained under the auspices and supervision of Gordon and the PAIRS Foundation, the organization that officially oversees PAIRS programs, products and licensing worldwide. There are PTPs and facilitators around the world. Check “Finding an Educator” to find one near you or near one you love who may need PAIRS. PAIRS is effective in all populations for which it has been adapted. PAIRS has relationship skills training programs for children and youth, PAIRS for PEERS, that are taught in schools, churches and agencies. PAIRS has programs for the Military, for use by chaplains and family service workers. PAIRS has faith-based programs for the Jewish, Catholic, and Christian church communities. PAIRS is currently developing programs and program delivery systems for disadvantaged youth, unmarried families, single parents, domestic violence, prison parolees, and related groups who can benefit from relationship skills training. PAIRS provides a vital ingredient to build stable marriages and healthy families with more hopeful futures for children. These programs for special groups will be taught by local agency workers and by specially trained community teachers and mentors. Research on PAIRS has demonstrated that PAIRS works for all groups under all circumstances evaluated. PAIRS is a modern technology adapted to our rapidly changing society in behalf of creating a saner, safer more loving world. What you will learn in PAIRS Sustaining a pleasurable intimate relationship does not work by magic. It depends upon a set of skills and understanding that can be learned. We learned most of what we know about intimate relationships through our early experiences in our families. Our personal history has a great deal of influence on what happens in our current relationships - on our behavior, our feelings, our expectations. We can change these influences if we become aware of them and wish to. It is well worthwhile to sort through what we inherited, keeping what fits for today and changing what does not. PAIRS Competencies are specific skills that you will learn from PAIRS. These competencies focus in three areas: 1) emotional literacy; 2) conjoint partner skills for building and maintaining intimacy; and 3) practical knowledge, strategies and attitudes for sustaining positive marriage and family life. You may click on the above links to see a listing of the skills taught in PAIRS. The Goal of PAIRS is a relationship that both partners can live with joyfully. For this to happen, each partner must become able to identify his or her own feelings and needs, and learn to communicate them in such a way that they can get met. This means communicating one's needs and desires without making the other partner feel resentful, smothered, burdened, manipulated, or inadequate. Easily and fully meeting each others' needs is the foundation of intimacy, fulfillment, and happiness. PAIRS teaches specific easily learnable tools for successful communication such as confiding, complaining, and clarifying and for effective problems solving such as managing anger, expressing anger safely, fighting fairly for change and eliminating dirty fighting. PAIRS also guides the vast deepening of self-knowledge and develops emotional literacy. PAIRS addresses pleasure and satisfaction by teaching skills to enhance bonding, sensuality and sexuality in marriage. PAIRS teaches a profound but simple model, the Relationship Roadmap, to understand relationship success and to understand relationship mishaps and know what to do about them. PAIRS teaches over 60 skills that, after PAIRS, become the participants' PAIRS Tool Box for ongoing relationship maintenance. 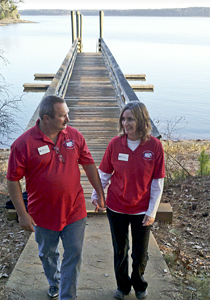 The Department of Veterans Affairs is trying a new path when it comes to caring for and healing the Nation’s wounded Veterans.

Now, in addition to repairing their damaged bodies and minds, VA is attempting to go one step further and repair their crumbling marriages.

PAIRS VA Marriage Retreats that began at the Charlie Norwood VA Medical Center in Augusta, Georgia in 2009 are today helping thousands of Veteran families throughout the United States.

That’s why Craddock and another VA Chaplain, Ed Waldrop, together with the nonprofit PAIRS Foundation, launched VA’s very first marriage retreat three years ago at the Charlie Norwood VA Medical Center in Augusta, Ga. The retreats are conducted by VA chaplains, social workers, psychologists, and counselors who have been certified by PAIRS Foundation as instructors for teaching better communication skills, relationship skills, and emotional literacy skills to couples. The VA Marriage Retreats are based on the PAIRS Essentials curriculum.

PAIRS For Military and Veteran Couples

I Am ME: Chaplain Sue Cross

I Am ME: Chaplain Dick Millspaugh