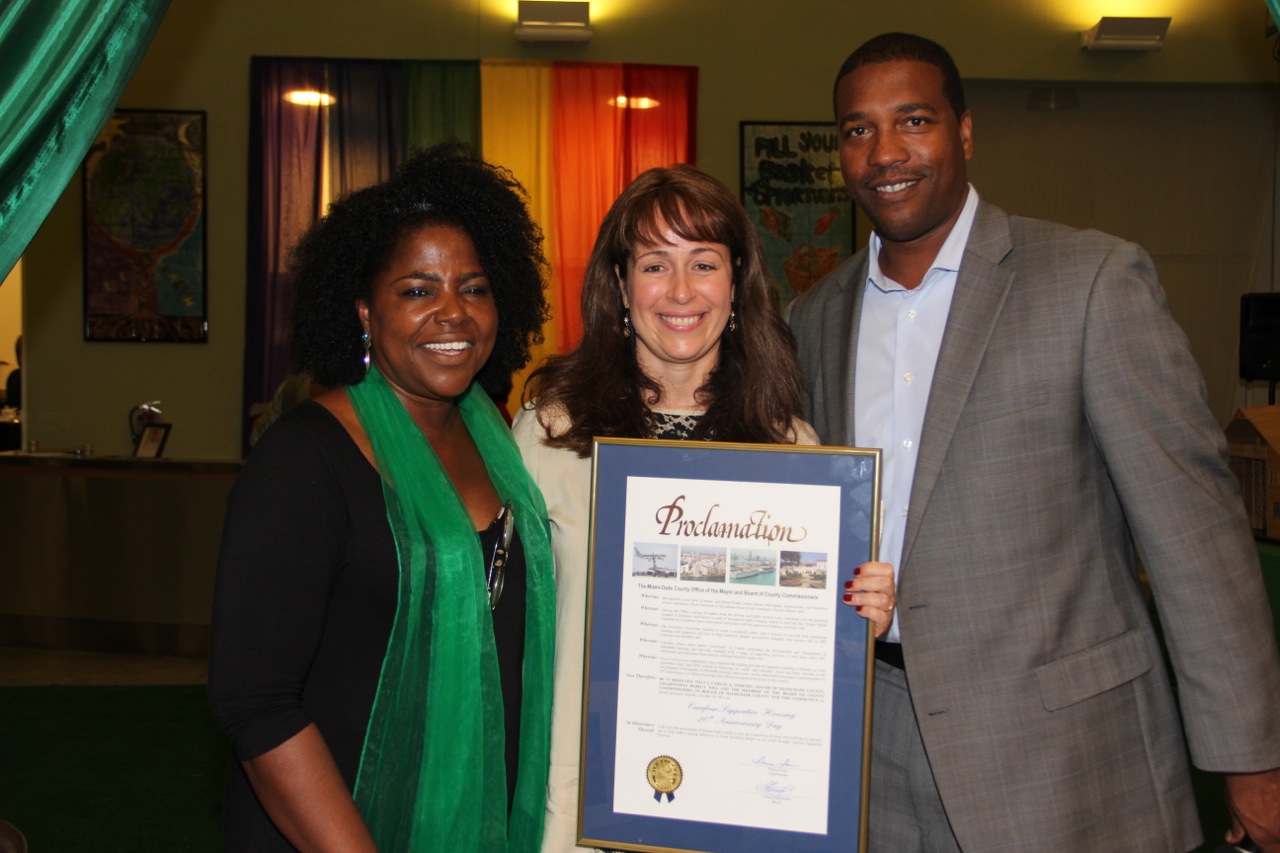 Despite providing affordable housing to more than 10,000 residents of Miami-Dade County over the past 20 years, leaders of Florida’s largest developer of supportive housing know much more is needed to achieve their collective goal of ending homelessness. More land. More housing. More supportive services. And more resources to pay for it all.

Built on the site of the former Homestead Air Force Base, Verde Gardens, like many of Carrfour’s communities throughout Miami-Dade County, has become a national model for ending homelessness that has touched the lives of more than 10,000 Miami-Dade County residents over the past 20 years.

Verde Gardens resident Alma Santos thanked the group for Carrfour’s contribution to her family’s life. “Thank you, thank you, thank you,” Santos said tearfully, standing beside her 14-year-old son. “You have forever changed our lives and made it possible for us to now help others.”

Deputy Mayor Benford announced the proclamation by Mayor Carlos A. Gimenez and the Board of County Commissioners, which read:

“Since Carrfour was established, it has remained the leading provider of supportive housing in Florida, as it has assembled more than $200 million in financing, tax credit, and subsidies, which has been essential in the development of thousands of units of affordable housing, hence now, as this remarkable association commemorates  its 20th anniversary, it is fitting and proper that official recognition be given by this county.”

“Tonight is a celebration of what’s possible when our community comes together on behalf of our shared commitment to end homelessness,” Berman said.

Board Chair Carol Fine thanked the agency’s local and national partners, while stressing that although Carrfour’s efforts have shown that the challenges of ending homelessness can be overcome, achieving that goal requires increased resources to continue building on successful models.

The evening commemoration was organized by Anthea Pennant, Carrfour’s Director of Fund Development and External Affairs, who spoke about the impact helping end homelessness has had on her life.

“I joined Carrfour to help others,” Pennant said, “but my life has been forever enriched by the lessons, stories and courage of our residents.”

Paola Roman, Carrfour Vice President of Housing Development, hand delivered invitations to local community leaders dressed as Dorothy from the Wizard of Oz. Roman and other Carrfour managers dressed as Wizard of Oz cast members to entertain special guests during the evening to reinforce the event’s “No Place Like Home” theme.