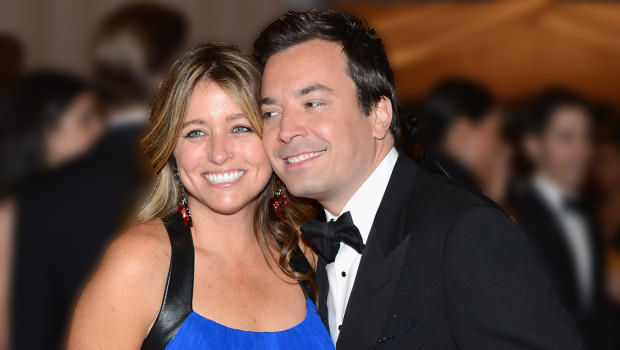 “Now I understand why people are on Facebook. I get it now. I get it.”

Over the summer, fans of Late Night with Jimmy Fallon got quite a surprise during Jimmy Fallon’s opening monologue.  Thousands were delighted to hear the host and his wife, film producer Nancy Juvonen, had become parents to a beautiful, healthy daughter via surrogate.

“Her name is Winnie Rose Fallon and she’s so cute,” Jimmy Fallon said.

News of Winnie Fallon’s birth came as worldwide attention was focused on the birth of the Royal Baby in England, where Catherine, Duchess of Cambridge, and husband Prince William, welcomed a son, Prince George of Cambridge. As Fallon shared his joy over Winnie’s birth, he promised Kate and William their children would soon get together for a playdate while reminding the Royal Couple to carefully protect their newborn’s birth certificate.

A glowing Fallon later explained that the couple had tried a handful of procedures to get pregnant. Yet, it is not always so easy for people to experience parenthood. Mutual friend Drew Barrymore introduced Jimmy Fallon and his soon to be wife, Nancy Juvonen, on the set of 2005’s Fever Pitch.  The couple had been trying to conceive since they got married in 2007. The fact that they were having a surrogate was kept under wraps.

While Dad is still a fan of the Disney cartoon, it is not where Winnie got her name.  He and Nancy were engaged at a New Hampshire lake house on Lake Winnipesaukee.

In a Parade magazine cover story two years before Winnie’s birth, Fallon said fatherhood had become one of his most important goals.

Balancing parenting with busy careers can be a challenge for any couple, including those with vast financial resources. Like many others, Jimmy and Nancy could benefit from the advice of Dr. Wayne Sotile, author of “Supercouple Syndrome: How Overworked Couples Can Beat Stress Together.”

“Supercouple syndrome,” as Dr. Sotile defines it, “is an all-too-common consequence of the pursuit of the Big Life. It is the natural outgrowth of people’s unrealistic determination to do everything right—to juggle marriage, family, and career, and be all things to all people.”

With nearly two million regular viewers to entertain, Jimmy Fallon’s challenge of keeping wife and daughter his top priority is no easy task. Marriage and relationship pro Seth Eisenberg, CEO of the nonprofit PAIRS Foundation, said exercises such as PAIRS Daily Temperature Reading can be helpful for couples working to balance work, marriage and parenting, and especially important for couples whose careers often have them hundreds or thousands of miles from each other.

After hosting Late Night for four years, Fallon will take over Jay Leno’s spot as the host of NBC’s The Tonight Show in 2014. It’s easy to see why Dad is on Cloud Nine.