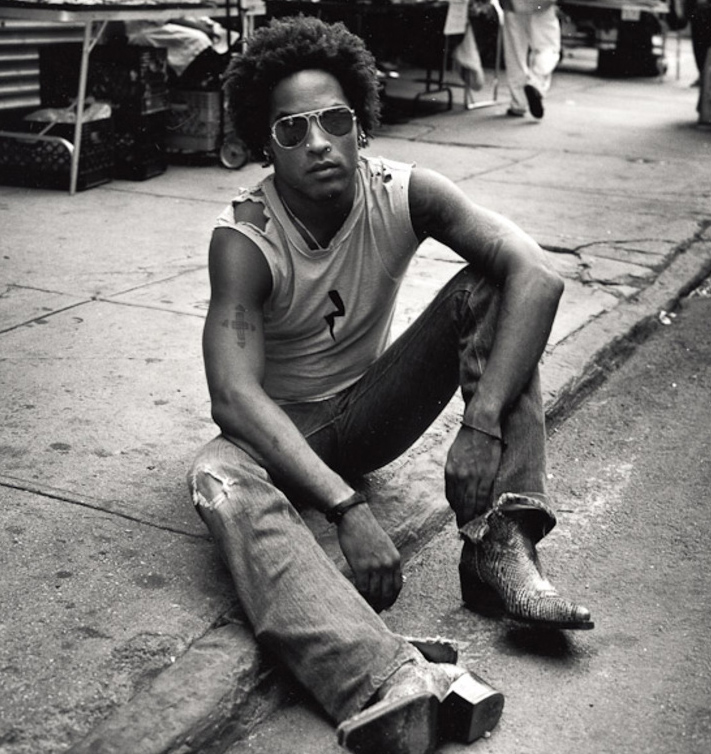 Nobody is cooler than Lenny Kravitz.

The multitalented winning singer-songwriter meshes rock with soul and funk into a retro style of his own. The global superstar musician in dreadlocks not only supplies his own background vocals, but often his own guitar and keyboards in recording sessions. Lenny Kravitz took home the Grammy for the Best Male Rock Vocal Performance every year from 1999 to 2002, setting the record for consecutive wins. Twenty years ago, the man in dark sunglasses was one of the hottest acts on MTV. His videos are eccentric.  Better yet, Lenny Kravitz’s live performances are spectacular.

Leonard Albert Kravitz was born 49 years ago in the Big Apple.  He is the only offspring of Roxie Roker, the well-known Bohemian who spent a decade playing Helen on “The Jeffersons.”  His father, Sy Kravitz, was an NBC News Producer.

Being the son of music lovers, young Lenny Kravitz grew up listening to the best jazz, blues and Motown ever made.  As a toddler, Lenny was already learning to play drums, even if it was on the pots and pans in the kitchen.  Mommy encouraged his dream of being a rock star, and a guitar was soon added to the mix.  Lenny’s mother often took him to the New York Theater, where she was often the star on the stage.

From the 1989 release of  and Mama Said to eleven years later, Lenny Kravitz rules the Billboard charts, award ceremonies and land of music videos. After moving back to Brooklyn, Lenny was introduced to The Cosby Show’s Lisa Bonet. The two quickly fell in love and tied the knot. The rock star and Denise Huxtable had a baby girl, Zoe. Zoe’s Godmother is none other than family friend and multi-Oscar Award winner Marisa Tomei.

Lenny has also worked with superstars, ranging from Mick Jagger and Michael Jackson to Grandpa Steven Tyler and Madonna. The superstar was even romantically involved Madonna, as well as Nicole Kidman and Halle Berry.

Lenny’s Mother passed away in 1995. In June of this year, Lenny opened up about his relationship with his father on Oprah’s Master Class.It was revealed that Sy Kravitz implemented tough love. In fact, Lenny was scared of his dad growing up. Spending multiple years as a Green Beret, Dad felt extremely threatening to his son. Apparently, all of Sy Kravitz’s sensitive qualities died in combat.

Watch for Lenny’s memorable role as Cinna in The Hunger Games film series.  The soulful actor also has a supporting role in 2009’s Precious, as well as Lee Daniels’ The Butler from earlier this year.