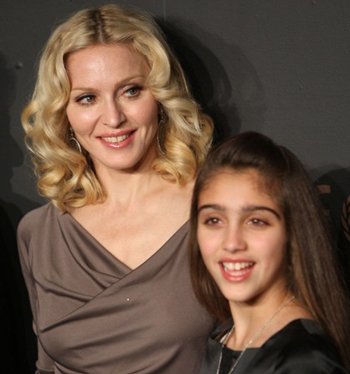 “How cool would it be to have your own fashion line with a parent? How much better would that be if your mother was Madonna?”

Since 2010, Madonna and her daughter, Lourdes Leon, aka Lola, have been designing Material Girl clothing for Macy’s Department Store. The exclusive line of teen clothing pulls from different phases of the rock icon’s career, from “Who’s That Girl” and “Like a Virgin” to “Papa Don’t Preach.”  The collection can be found in more than 300 department stores across the nation, as well as online.  Consumers get to pick from edgy crop tops, pants with high waists and even weird paneled cowboy attire, along with chic footwear, bags, jewelry, and hair goods.  There are also polka dot push-up bras, lip gloss and body sprays.  Inspired by the Eighties, the punk rock-girl style can be ideal for bringing the young and attractive fashion out of mothers, as well as their daughters. Spokeswomen for the clothing line have included Kelly Osborne, the well-known 28-year-old daughter of Ozzy Osborne.

“I love being part of a brand for girls and having the opportunity to work with Lola, who has an amazing fashion instinct,” Kelly told the LA Times.  “Added to that is the fact that Madonna has been a big influence on my style over the years.”

Whether you are a schoolgirl or a working girl, there should be something for every young lady. Not only do the clothes look magnificent, but the department store also takes pride in their low prices. Just about every appealing piece of the Material Girl collection is priced between $15 and $40. Material Girl is one of the bestselling names for young ladies.

A sales associate at Macy’s in Manhattan claims to see plenty of teenage girls walking around the store with their moms and dads. It can be quite entertaining to watch the kids trying to get their mothers to try on new outfits, even if the clothes were designed for the youngsters. Trying to stay hip is all part of fatherhood and motherhood.