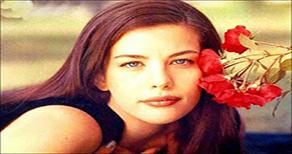 “To have a son was huge for me, because it’s been the most solid, healthy, consistent relationship I’ve ever had with a male in my whole life. He couldn’t give a rat’s ass about me being famous or a movie star or anything.  I learn so much from him.”

Hollywood superstar Liv Tyler has some big blockbusters on her resume. After appearing in the music video for Aerosmith’s “Crazy,” the 36-year-old celebrity has shared the silver screen with some of the industry’s top names, ranging from Tom Hanks to Bruce Willis and Ben Affleck.  In the new millennium, Liv has starred in the international box office phenomenon, the Lord of the Rings trilogy. The world famous personality recently entered motherhood.

Growing up in the Eighties, the brunette beauty never knew that Steven Tyler was her father. She had thought that she was an offspring of rock star Todd Rundgren. While attending an Aerosmith concert at the age of 11, the truth was unveiled. Quite a surprise when you are at the concert.

Back in 2003, Liv married English rock star and vocalist of Spacehog, Royston Langdon.  They have a beautiful baby body named Milo.  The two celebrities took some quality time away from the spotlight to focus on motherhood and fatherhood.  Unfortunately, there was a divorce.  Yet, Liv and Royston vowed to stay friends after a 10-year relationship.  Liv’s wide-eyes reappeared on the silver screen in 2007 next to Adam Sandler in Reign Over Me.

These days, Milo is 8-years-old, and he is as adorable as ever. Milo was photographed last week strolling around the West Village in New York City. The young rock star wore a t-shirt sporting his name written in graffiti.

Earlier this month, Liv discussed motherhood with Stephanie Takyi of the UK’s Mail Online.  “To have a son was huge for me, because it’s been the most solid, healthy, consistent relationship I’ve ever had with a male in my whole life,” she said.  “He couldn’t give a rat’s ass about me being famous or a movie star or anything.  I learn so much from him.”

In July, Grandpa Steven Tyler stopped by the set of The Leftovers for a little surprise visit.  The new show written by Lost’s Damon Lindelof is being filmed for HBO.  Liv was acting like the kid, as she was so excited to see her Old Man.  To this day, Steven still manages to teach his daughter a thing or two about motherhood.   There is no question that Liv lives a charmed life.  Of course, it certainly doesn’t hurt that Daddy is a Rock Star.

Watch for Liv’s upcoming film, Jamie Marks Is Dead, based on a coming-of-age Christopher Barzak novel, to be released in 2014.