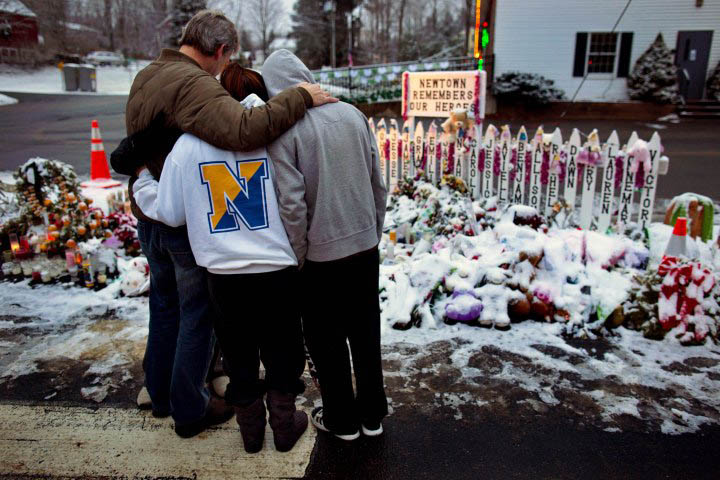 A month after the tragic murder of 20 children and six adults at Sandy Hook Elementary School, millions continue to mourn the horror of December 14th; pained moments and images forever etched in America’s collective soul and memory.

For many, these stolen, precious lives have become icons for the broken hearts and shattered dreams from more than 1.2 million violent crimes committed in our homes, neighborhoods, schools, offices, churches, movie theatres, shopping malls and elsewhere each year, including more than 215,000 murders in the 14 years since teenagers Eric Harris and Dylan Klebold killed 12 classmates, one teacher, and themselves at Colorado’s Columbine High School. While mass shootings are most likely to capture the public’s attention, they are responsible for less than a fraction of one percent of those deliberately murdered in America each year.

Yet the legacy of Sandy Hook for many is that there is no safe haven in a world full of beauty, meaning, miracles and, far too often, unspeakable cruelty disconnected from the compassion, decency, spirit and potential with which every human being begins life fragile and innocent.

While each tragedy has its unique history and dimensions, there are also common factors in many violent crimes almost entirely disconnected from the focus of sweeping gun laws passed in New York this week, the executive orders and legislation President Obama will propose today, and the impassioned debates that have become the daily fodder of advocates fiercely determined to advance agendas and interests beneath the shadows of Newtown’s lost.

Were the 37 killers who committed mass shootings from the time of Columbine, only one of whom was a woman, destined to horrific acts of senseless brutality?

Including Harris and Klebold, 11 were 25 or younger, including eight who had not yet reached their 21st birthdays; five of these youngsters became their own final victims. Since 2010, just two of the perpetrators of mass shootings, both in California, were older than 40.

Parents of the murderers are often left with questions that will never be fully answered. How could the sons they raised have committed such horrific, often last acts, of desperation and depravity? What did they do wrong? What could they have done differently?

Sadly, there is no guaranteed formula, executive order or legislation that will entirely end violent crime in America. But there is much we can do as parents that is more likely to prevent our sons from growing up to be killers than the illusive finish line of the Congressional battles and national debate over President Obama’s proposed assault weapons ban, stricter registration and tracking requirements, and screening to limit the ability of people with severe mental illness to legally get powerful weapons of mass destruction.

Every parent and child deserves to understand the most basic lessons in emotional literacy: that painful, upsetting emotions held inside eventually either implode or explode. That may go against our natural inclination to tell our sons not to be mad, sad or scared when, in reality, they are. The intensity of those feelings grows only stronger when they’re held inside, eventually demolishing the opportunity to experience joy, love and compassion along with the ability to think clearly and rationally.

For most, learning to release painful emotions doesn’t require therapy, counseling or medication. It does require loved ones who can listen with empathy – with a sense of what it’s like to be in the other person’s shoes – regardless of whether they agree with the feelings confided.

The formula for helping bring relief to a loved one experiencing emotional turmoil can be understood by a child, as I’ve seen firsthand from experiences in elementary, middle and high schools in some of America’s most vulnerable and violent communities.

How Do You Know?

How do you know if someone you love is experiencing emotional turmoil?

Leaking can be passive or active. Active leaking can come out through actions such bullying, blaming, accusing, threatening, taunting, or labeling. Passive leaking can show up as acting like a constant victim or martyr, playing confused, lying, withholding, withdrawing or putting up a stonewall to isolate physically, mentally and emotionally from others.

While some of these behaviors may seem all too common in homes, schools and offices, they are not signs of happy people.

With the best of intentions, it can be easy to inadvertently make things worse for loved ones instead of helping them find relief.

Thousands of times over, I’ve seen relief come from a friend or family member asking someone who’s upset a sequenced series of questions, fully listening to what they say, and simply thanking them for confiding.

That means setting aside the temptation to judge, agree or disagree, interject, deny, distract, try to fix or solve, tell someone not to feel what he or she feels, ask questions, or bring the issues up later unless the person with the feelings wants to talk about them further.

When doing this exercise with a child, the child should always be the Speaker and not the Listener. For couples, friends or others doing the exercise together, it’s important, especially when first learning the process, for the Speaker to avoid saying things that could feel like an attack or criticism of the Listener.

What are you MAD about?

When you’re ready to begin and in a position where you can be completely focused on each other without distractions, the Listener starts by asking the Speaker:

“What are you MAD or ANGRY about?”

This is an invitation for the Speaker to look deep inside to see and feel what’s in their gut that’s connected to feelings of ANGER and to express those feelings in words. It’s not a speech, lecture or conversation, but a chance to become aware of the feelings and say them aloud.

As the Speaker confides, the Listener should stay focused on the Speaker’s eyes and words, listening much more with the heart than the head.

After the Speaker has confided, the Listener says, “Thank you. What else are you MAD or ANGRY about?” The Speaker continues to look inside and give expression to whatever is there.

Again, after the Speaker confides, the Listener continues to express appreciation to the Speaker for sharing and asks, “What else?”

“Thank you. What else are you MAD or ANGRY about?” [Depending on time constraints and the depth of confiding, the Listener can continue to ask or can move on to the next step.]

When the Speaker indicates they’ve expressed everything they’re mad about [or you’ve used about a quarter of the time you’ve agreed upon], the Listener says, “Thank you. If you were MAD or ANGRY about anything else, what would it be?”

This step is very important, as the deepest feelings may come out last.

What are you SAD about?

Again, the Listener expresses appreciation, “Thank you,” and then asks:

“What are you SAD about?”

After the Speaker confides, the Listener says, “Thank you. What else are you SAD about?” The Speaker continues to look inside and express whatever is there.

Again, after the Speaker confides, the Listener continues to express appreciation to the Speaker for sharing [by saying “thank you” or through a gesture such as an embrace] and asks, “What else?”

“Thank you. What else are you SAD about?”

When the Speaker indicates they’ve said everything they’re SAD about, the Listener says, “Thank you. If you were SAD about anything else, what would it be?”

What are you SCARED or WORRIED about?

Again, the Listener expresses appreciation, “Thank you,” and then asks:

“What are you SCARED or WORRIED about?”

After the Speaker has confided, the Listener says, “Thank you. What else are you SCARED or WORRIED about?” The Speaker continues to look inside and confide whatever is there.

Again, after the Speaker confides, the Listener continues to express appreciation to the Speaker and asks, “What else?”

“Thank you. What else are you SCARED or WORRIED about?”

What are you GLAD about?

Again, the Listener expresses appreciation, “Thank you,” and then asks, “What are you GLAD about?”

After the Speaker has confided, the Listener says, “Thank you. What else are you GLAD about?” The Speaker continues to look inside and confide whatever is there.

Again, after the Speaker confides, the Listener continues to express appreciation to the Speaker and asks, “What else?”

“Thank you. What else are you GLAD about?”

When the Speaker indicates they’ve sufficiently expressed what they’re GLAD about, the Listener says,

Appreciation for Sharing and Listening

The exercise ends with a tangible sign of appreciation for sharing and listening, which is often a hug.

In Memory of Sandy Hook’s Children

In memory of the children of Sandy Hook, the nonprofit PAIRS Foundation is giving away wallet cards with instructions for helping a loved one empty their emotional jug. To receive a free set of cards, send a stamped, self addressed envelope by January 31, 2013 to PAIRS Foundation, Sandy Hook Memorial, 200 S. Park Road, Suite 455, Hollywood, Florida 33021. Teachers requesting cards for their classroom should indicate the number of students and grade level.

Seth Eisenberg is the father of three sons and President/CEO of the nonprofit PAIRS Foundation in Hollywood, Florida, an industry leader in marriage, family and relationship education.