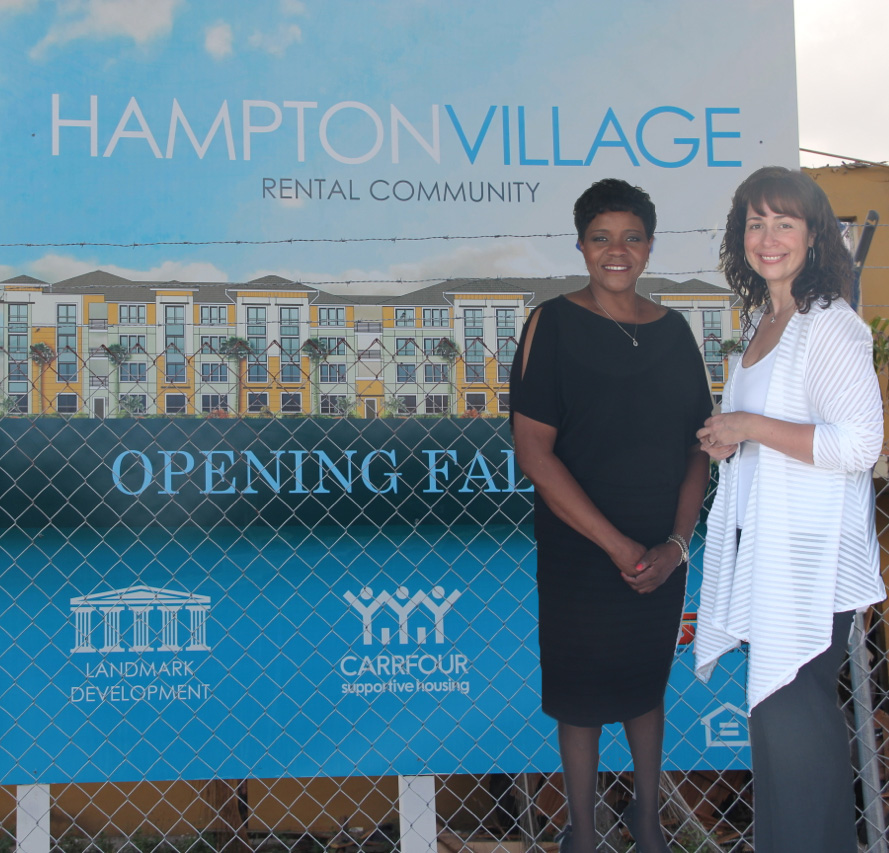 With homelessness on the rise across the country, Florida’s largest nonprofit affordable housing developer is putting federal stimulus dollars to work through the delivery of 256 new residences at three formerly-distressed apartment complexes in Miami-Dade County. Miami-based developer Carrfour Supportive Housing acquired the properties with $17 million of federal monies allocated through the U.S. Department of Housing and Urban Development’s (HUD) Neighborhood Stabilization Program 2 (NSP2). On Friday, Carrfour Supportive Housing broke-ground on the rehabilitation of Hampton Village Apartments in Miami.

At the ground-breaking for Hampton Village Apartments Friday, Miami-Dade County District 3 Commissioner Audrey M. Edmonson said the 100 fully-renovated homes, all of which will be designated for residents with income at or below 60% of the area’s median income, will help alleviate the critical shortage of high quality, affordable housing in her community. Hampton Village is located at 4301 NW 29th Avenue in Miami.

“Our rehabilitation of Hampton Village, Harvard House and Tequesta Knoll will result in a triple win for the Miami-Dade community. Beyond providing much-needed housing for families and individuals in need, we will rescue these apartments from distress while creating hundreds of construction jobs.”

The projects will create about 340 construction jobs and provide permanent housing for approximately 1,092 men, women and children over the next two years.

The federal government’s Neighborhood Stabilization Program aims to revitalize communities that have been negatively impacted by properties that were foreclosed upon or abandoned as a result of the recession. The HUD initiative – part of the American Recovery and Reinvestment Act of 2009 – has granted nearly $2 billion to states, local governments, nonprofits and public and or private nonprofit entities on a competitive basis, with the purpose of rehabilitating distressed properties. Carrfour Supportive Housing was part of a consortium of Miami-Dade County development firms that were granted $89 million in funding through the program.

One thought on “Carrfour Breaks Ground on Hampton Village”