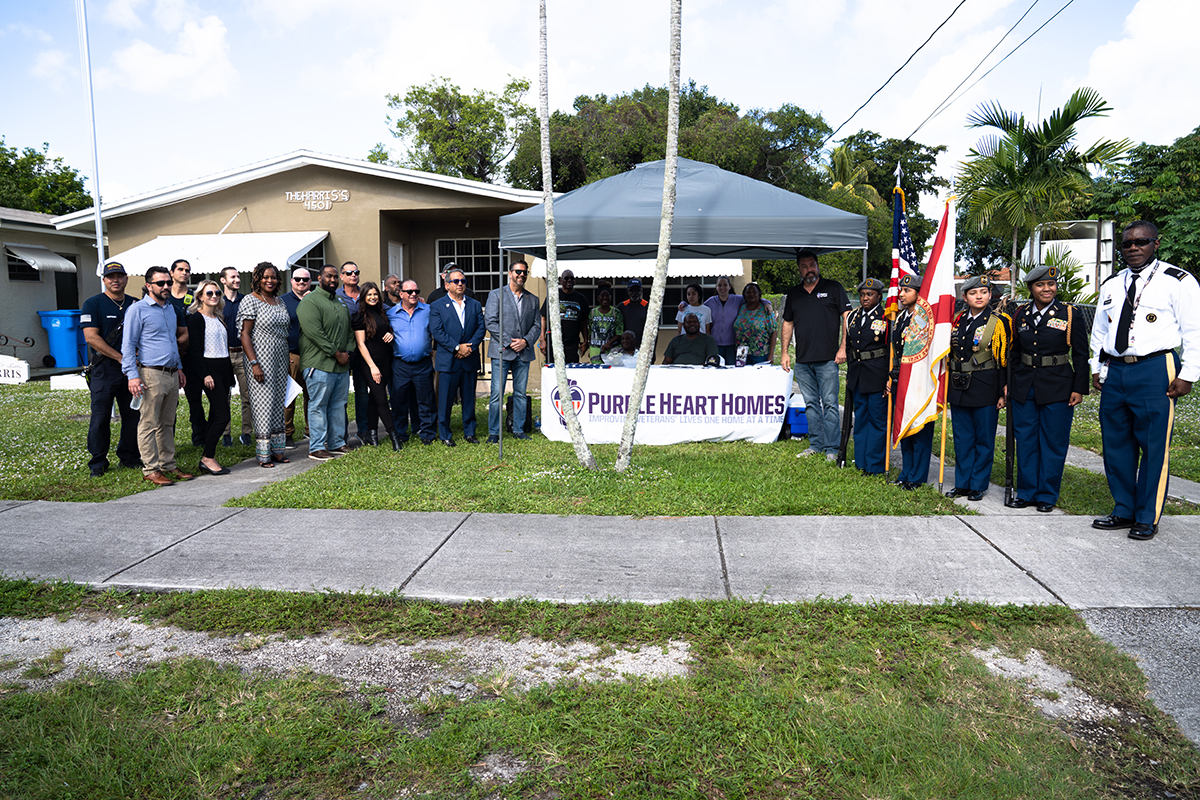 Hundreds of American military veterans are homeless in the greater Miami-Fort Lauderdale area with thousands more at imminent risk of homelessness and facing urgent challenges to housing stability, Purpose Built Families Foundation reported this week. Purpose Built Families is South Florida’s largest provider of supportive services for homeless and at-risk veteran families with an approach uniquely developed to prevent and reduce veteran suicide. Homeless veterans are considered to be at the highest risk for suicide.

Since October, the agency’s Operation Sacred Trust Supportive Services for Veteran Families (SSVF) program has housed 70 homeless veteran families in Broward and Miami-Dade counties with 321 homeless and at-risk veterans currently receiving emergency services from the Fort Lauderdale-based nonprofit. Despite national reports that overall veteran homelessness has decreased, the agency is receiving greater numbers of requests for emergency assistance. For example, Purpose Built Families served 441 veterans and family members in October 2021. This past October, that number increased by 17 percent to 517 people requiring emergency help. In November, the year-to-year increase was more than 25 percent.

The agency’s national Board of Trustees met this week to review the prior fiscal year, evaluate performance measures, approve budgets, and align on strategic priorities. Most urgent: developing additional funding sources and partnerships to meet the increasing needs of homeless and at-risk veterans.

For the period from October 1, 2021 to September 30, 2022, the agency’s Operation Sacred Trust Supportive Services for Veteran Families program assisted 1,019 low-income veteran families in Miami-Dade and Broward counties, many of whom had zero income when they reached the program. During that period, the agency distributed nearly $3 million in temporary financial assistance to help end and prevent homelessness for South Florida veteran families.

Joseph A., a former Marine Corps sergeant who’d been recognized with multiple meritorious service medals was sleeping in an abandoned building when he connected with Purpose Built’s Operation Sacred Trust engagement team over the summer. The 59-year-old Marine had lost work when the pandemic shut down local venues where he’d developed his career as a magician and was barely able to buy food with the $284.13 he received monthly from the VA for his 20 percent service connected disability. Shelter in a condemned building was the only option he could find. All alone in the world, the Massachusetts-native continued to sleep in that building even after being diagnosed with lung cancer.

Last month, a landlord who prioritizes Operation Sacred Trust veterans notified the agency’s housing team of an opening. Within days, Joseph signed the lease for his new one bedroom apartment. With his housing voucher and now receiving nearly $2,000 monthly in VA benefits as a result of OST’s assistance, Joseph is continuing his cancer treatment and is hopeful about the future.

“It is never a wise question to ask ‘Why is this happening to me?’” the decorated, heroic Marine sergeant said. “Life is short, and we should focus on the good. It is important to continue to grow no matter where you find yourself in life,” Joseph stressed.

Paul Lawrence, an Army veteran and former Undersecretary for Benefits at the U.S. Department of Veterans Affairs has mentored Operation Sacred Trust’s frontline veteran benefits team and serves on the foundation’s Board of Trustees. With Dr. Lawrence’s support, the agency’s benefits team has helped area veterans secure more than $2.7 million in additional annual VA benefits, with decisions often coming in record time. For many veterans who had previously waited years and even decades for benefit decisions, Purpose Built’s team helped expedite review and decisions typically within 45 to 90 days.

Dr. Alex Eisenberg, a Miami-area physician and vice president of the nonprofit’s Board of Trustees, said he’s continuously inspired by the courage and resilience of the veterans served by Operation Sacred Trust.

“These heroes who have given and sacrificed so much for all of us are among the bravest, most generous, resilient men and women you could ever meet,” Dr. Eisenberg said.

Dr. Eisenberg said many of the hardest hit military veterans have a difficult time reaching out.

“They’re trained to solve problems, overcome challenges, and depend on themselves. Our veterans need to know we’re going to find them when they need us most, that we’ll be there to answer their call 24/7/365, be there for them as they’ve been there for us, and ensure our community honors our sacred trust to all of them everyday.”

Henthorn said the agency counts on funding from the U.S. Department of Veterans Affairs and active support from the local community.

“Veterans who have given their best have earned our best,” Henthorn said. “We urgently need landlords who can provide housing and resources that extend our ability to meet the needs of our hardest hit veterans for whom every day is a miracle,” he added.