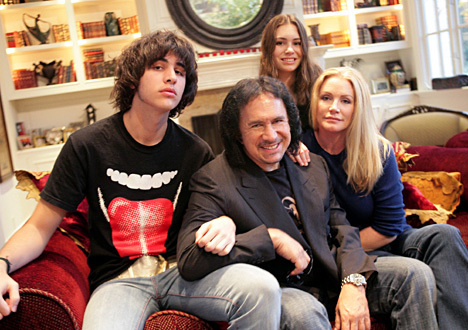 In 2003, Nickelodeon aired My Dad the Rock Star, a colorful cartoon created by Gene Simmons, the bass guitar player of the iconic heavy metal band KISS. The show was also seen on Teletoon in Canada, as well as the UK’s Pop! The main character of the show is Willy Zilla, a teenage boy learning the ins and outs of life. Only it’s not so easy when you are the son of the eccentric rock star Rock Zilla, an eccentric pop icon dealing with fatherhood. All the boy wants is to be accepted for himself, rather than who his Dad is. He thinks he sees his chance when Rock Zilla retires and moves to Silent Springs. However, Daddy still manages to make a mess out of everything.  It’s a good thing that Willy and his two new friends can handle all the adventures.

Simmons got the idea for the cartoon when his son Nick brought a photo of his old man at work to his kindergarten class. In the picture, the musician was spitting fire with blood running from his mouth. Based on Simmons’ book, My Dad the Rock Star: Rebel without a Nose Ring, the cartoon was originally about the band KISS. Of course, the plot later changed to a family with celebrity parents. Focusing on the bass player’s actual struggles with fatherhood, Rock Zilla flaunts Gene’s famous long tongue. His son, daughter and wife have all been fictionalized as well.

My Dad the Rock Star was quite popular in North America for two seasons. Yet, Simmons himself eventually threw in the towel. Perhaps he just wanted to get back to touring the world as a rock star with KISS. By 2006, the family must have been itching to be back in the spotlight. The Gene Simmons Family Jewels television program aired on A&E. Every episode revolves around an adventurous family outing.  Family adventures entail Gene managing his boy’s band, as well as getting cosmetic surgery done alongside his wife. The sixth season entails the rock star’s wedding taking place in Beverly Hills. After seven seasons, Gene returned to business, supplying the beats for KISS.

Born as Chaim Witz in Israel in 1949, the young entertainer and his mother eventually moved to Queens, New York. It was watching the girls scream at the Beatles legendary performance on Sullivan on February 9, 1964 that convinced him to go into show business. These days, Simmons is figuring out the ins and outs of fatherhood with model and actress Shannon Tweed in Beverly Hills. After dating for 28 years, the two tied the knot in 2011 and have been living happily ever after.

Click here to check out My Dad the Rock Star on DVD.