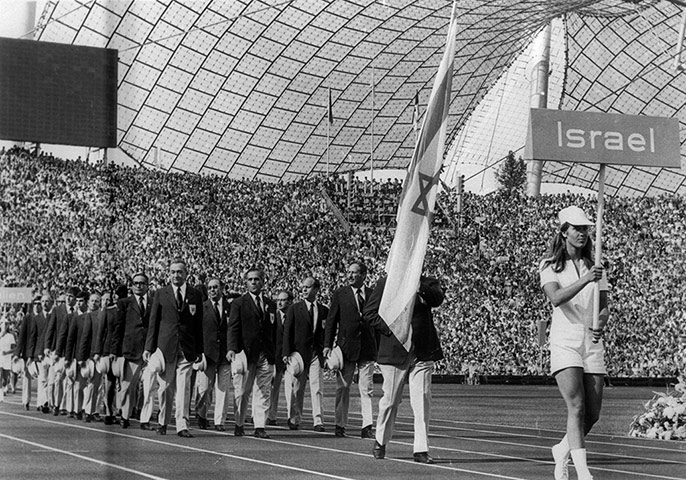 I had just celebrated my 11th birthday in September 1972 when ABC Sports commentator Jim McKay broadcast those words from the Munich Olympics.

“We just got the final word,” McKay told a worldwide audience. “Our worst fears have been realized tonight. They’ve now said that there were eleven hostages. Two were killed in their rooms yesterday morning, nine were killed at the airport tonight. They’re all gone.”

Eleven members of Israel’s Olympic team were murdered in a terrorist attack that one of the group’s leaders later wrote was funded by Mahmoud Abbas, former Chairman of the Palestine Liberation Organization (“PLO”) and President of the Palestinian National Authority for the past eight years.

Fencer Dan Alon was one of six Israeli team members who avoided capture by the Palestinian terrorist group in the Munich Olympic Village. Last year, 40 years after the events of September 5, 1972, Dan Alon was finally able to share his experience in Munich Memoir: Dan Alon’s Untold Story of Survival.

“We must learn tolerance for one another,” Alon writes, “but at the same time, we must be ever wary and learn intolerance for terror. If we can eliminate terror, we can foster the kind of true understanding and forbearance that will preserve us all.”

Dan Alon’s story of survival, faith, and fatherhood will be meaningful for anyone who has faced and struggled to overcome the horror of life-changing traumatic events.

On Friday, Dan Alon wrote to Israeli Prime Minister Benjamin Netanyahu regarding an article published here and on danielwultz.com about a father’s fight for justice against the Bank of China for its role in the murder of his 16-year-old son, Daniel Wultz, in a 2006 terrorist attack in Tel Aviv. It’s difficult to imagine any father not doing everything possible to hold those accountable for the murder of an innocent child.

My name is Dan Alon. I am a proud Israeli citizen and one of the few survivors of the most publicized terror massacre in Israel’s history. You may remember that I was a member of the athletic fencing team representing Israel at the Olympics games in Munich 1972. Eleven of my dearest friends were brutally murdered by terrorists in front of my eyes. I was lucky to survive but the nightmares of that horror are part of my life forever.

One consolation for me, and for Jewish people all over the world, was the determination and the courage of the Israeli government not to let the terrorists and their facilitators go unpunished. Israel made a brave decision and action, regardless of how other nations might react. Israel felt that it was more important for its future national security to hold those responsible accountable. Those responsible were hunted down by Israel all over the world. It earned Israel the respect of the world.

A few years ago, I was fortunate to meet Tuly and Sheryl Wultz. I learned about their horrific sacrifice at the hands of the Islamic Jihad terrorists. I am very proud of them for taking upon themselves and their family the fight against terror financing on behalf of all of us. Despite their terrible personal tragedy, they responded to the request of the Israeli government to sue the Bank of China, which was the facilitator in the money-transferring scheme to the Islamic Jihad and Hamas. I am proud that as part of rebuilding their lives, they chose to hold those responsible accountable.

Tuly [Wultz] is an Israeli patriot. He and his whole family –including his extended family in Jerusalem – have devoted themselves to seeking the truth regarding the role of the Bank of China in transferring money to terrorist groups. They decided to accept the challenge that was brought to them by the Israeli Government to fight terror for the safety of Israel and the rest of the world.

I was so very proud to learn that the Israeli government, again, as always, decided to fight terror in any way it has at its disposal, regardless of who the perpetrators are. Israel’s rightful policy is to hold terrorists and their facilitators accountable for their horrific murders.

This is particularly true in light of media reports I am reading from today, suggesting that the Chinese side engaged in a conspiracy to lie about the meetings with Israel that occurred before the murder of Tuly’s son. Israel simply cannot be a part of such a cover up.

I am pleading with you Mr. Prime Minister, please do not withhold any help from the Wultz family and the United States Federal Court. Please do not prohibit Mr. Uzi Shaya from testifying to the truth regarding his knowledge of the role of the Bank of China in financing terror.