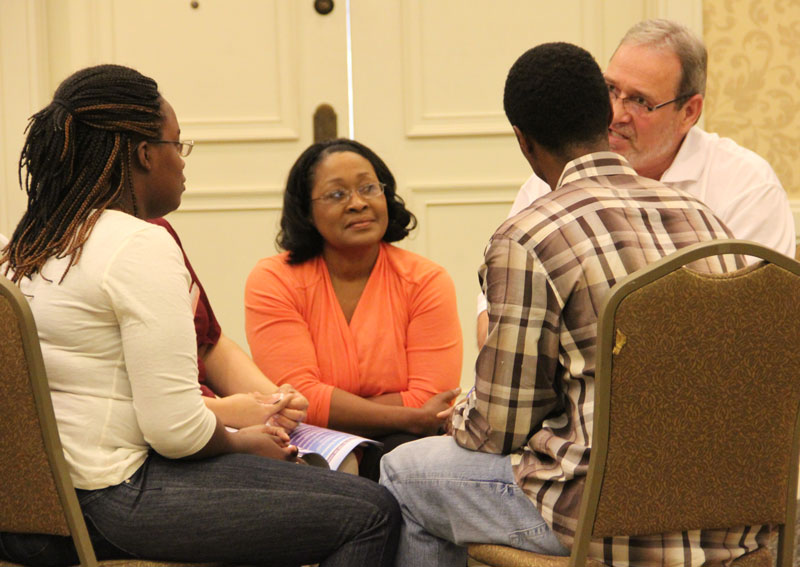 “There is significantly greater understanding, an enhanced ability to resolve conflict in a positive way, really talk to and hear one another, and have new ways of nurturing a close intimate, and respectful relationship with each other, which then affects the entire household in a positive way.”

The Department of Veterans Affairs is continuing to expand innovative efforts to help Veterans strengthen relationships with spouses, significant others and caregivers through relationship skills training many have found helpful to reducing symptoms of stress, boosting relationship happiness and resiliency

First lady Michelle Obama last week called on Americans to match the sacrifice of the military families with support for them. “We have to keep asking ourselves, what more can we do,” she said at a joint meeting with Jill Biden, former Senator Elizabeth Dole and former first lady Rosalyn Carter.

A study from the National Center for Post Traumatic Stress Disorder found, “People diagnosed with PTSD are three to six times more likely to divorce than those without PTSD.” Drs. Candice Monson and Casey Taft reported that a PTSD diagnosis was associated with a 400 percent increase in the likelihood of marital distress. Earlier this year, Jennifer Price, PhD, and Susan Stevens, PsyD reported on research that found ”Veterans’ PTSD symptoms can negatively impact family relationships and that family relationships may exacerbate or ameliorate a veteran’s PTSD.”

Chaplain Barbara Nollie of the James A. Haley Veterans’ Hospital in Tampa, Florida is hoping four upcoming Warrior to Soul Mate retreats, including one this weekend, will help Veterans and their loved ones “strengthen emotional connections, bonding, and appreciation for one another.”

Having seen the impact of the program firsthand with Veterans in Indianapolis, San Antonio, and St. Petersburg, Chaplain Nollie has high expectations for the Tampa VA initiative.

“By participating, Veterans and active-duty military couples share the excitement of a greater relationship quality, intimate bonding, and renewed pleasure of being in a healthy relationship,” Chaplain Nollie said.

As a result of the program, “there is significantly greater understanding, an enhanced ability to resolve conflict in a positive way, really talk to and hear one another, and have new ways of nurturing a close intimate, and respectful relationship with each other, which then affects the entire household in a positive way,” she said.

Based on PAIRS, a national evidence-based relationship skills curriculum, the Warrior to Soul Mate program is rapidly expanding through VA Medical Centers nationwide. Multi-year funding to train instructors and launch programs has been provided by the VA’s Patient Centered Care and Cultural Transformation initiative.

Chaplain Clyde Angel, on leave as Chief of Chaplains for the Richard L. Roudebush VA Medical Center in Indianapolis, is traveling to six cities in the next two months to train VA chaplains, behavioral health professionals and others to lead Warrior to Soul Mate programs. As the National Chaplain Center Liaison for the Warrior to Soul Mate Program, Chaplain Angel is helping launch and expand programs in Detroit, Danville, Ann Arbor, Battle Creek, Biloxi and Portland, with many more in his sights.

While PAIRS Foundation has helped thousands of Veteran and military families since 1983, when the nonprofit was initially established just minutes from the Pentagon, expanded collaboration with the VA began six years ago when Ron Craddock, Chief of Chaplain Services at the Charlie Norwood VA Medical Center in Augusta, GA, reached out for help to better serve couples affected by OEF/OIF deployments. Chaplain Craddock’s efforts led to national recognition of the program as a VA Best Practice.

Retired Lieutenant General Jeffrey A. Sorenson, former Department of the Army Staff’s Chief Information Officer, has been a strong advocate.

“PAIRS is a comprehensive and holistic approach to teaching couples how to share intimate feelings, conversations, and beliefs.  The course helps couples learn how to deal with the constant stress of living together in environments that place enormous stress on daily engagements,” General Sorenson said in 2010.  “My wife and I would not be as happy or content as we are today without PAIRS,” he added.

“We spend about 70 percent of our time helping couples with their communication skills,” Chaplain Craddock said. “When these Veterans come back from overseas, they don’t have the communication tools to talk to their spouse about their pain, their frustration, their grief. And we’re seeing this in both males and females…even the females returning from Iraq and Afghanistan want to seclude themselves. Just like the guys, they don’t want to be around crowds…they don’t want to go on family vacations or outings…”

“When we went to that first retreat, I had PTSD so bad I couldn’t even sit with everybody,” said former Army Sniper Ralph Lynn.

Lynn and his wife completed the retreat and went on to become trained instructors to help others.